Traders should definitely keep an eye on Dogecoin (DOGE) as the meme coin is showing a 30% gain in the coming days.

As the second largest PoW blockchain network and the 10th largest cryptocurrency in terms of market capitalization, nothing can stop the growth of DOGE at the moment. As of September 18, Dogecoin has been predicted to overtake Polkadot with around $576.235 million. According to CoinMarketCap, the DOGE price has increased by 2.25% or traded at $0.05813 as of now. The recent decline seen in August prompted many traders to buy DOGE at a low price.

The bulls overcome the bears with a 30% rally

Judging by the 8-hour chart, the Fibonacci Retracement tool shows an August high observed at around $0.092 and a recent low detected at $0.054, representing a 63.4% retracement at $0.08. If the figures on the chain are correct, the bears could be hit hard with a 30% rally. Moreover, the 4-hour chart also shows signs of a price increase, maybe Smart Money is entering the market. The DOGE spike can be attributed to an increase in volume over the past few days. The trading volume of this meme coin is expected to increase from 202.16 million to 344.5 million. Volume increased from 202.16 million to 263.32 million at the time of writing. And not only has trading volume shown significant growth, active wallet addresses have also increased. Active wallet addresses increased from 113k on September 15 to 120k on September 18. DOGE also attracts more miners, especially with its hash rate pumping which has increased by 4.86% over the past week showing the robustness and security of the Dogecoin blockchain. 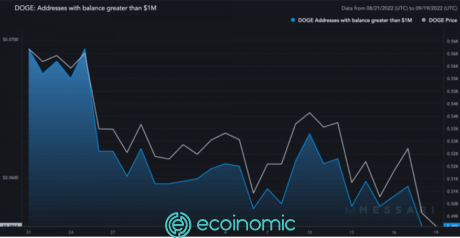 Another bad news is that whale interest in DOGE seems to have tapered off in August with wallet numbers dropping by as much as 13.04% over the past 30 days. Polkadot has also shown some volatility and also social media indicators, which could be the main reason why traders seem to shy away from the token. Overall, traders remain cautious as meme coins are known for extreme volatility. Even DOGE prices can change suddenly with any new updates or even some announcements from Elon Musk.

See also: Chiliz ($CHZ) maintains good performance as it is up 172% since the market slumped in June.