What are testnets and mainnets? The importance of Mainnet and Testnet to an ICO coin project

The global cryptocurrency ecosystem is constantly welcoming more new projects from developers. Every day billions of dollars are exchanged in the form of digital currencies and tokens on different blockchain platforms. There are currently more than $90 billion locked in DeFi and exchanged through new platforms. Many new platforms, DApps and Blockchain are launched every day. If these products are launched without going through actual testing, there will inevitably be many problems, millions of users could lose money and the entire DeFi region could fall into a state of collapse. That’s why Testnet and Mainnet exist.

Testnet (Test Network) is a version of blockchain that allows developers to test new features without compromising the Bitcoin Blockchain. Before a new coin other than the feature changes to the Bitcoin Blockchain is released and put into official running, it must be thoroughly tested and ensure that these features can run smoothly. Testnet will take on this responsibility as it is considered an alternative version of the Bitcoin Blockchain. Coins on Testnet usually have no economic value, transactions are still conducted normally as on the main network but will not carry value.

Mainnet (Main Network) is the official network and the official version of blockchain. After the developer runs the test on Testnet, they will officially apply the coin on the Mainnet.

When developers discover new features or technologies that are more in line with the old technology, they can proceed to change their Mainnet so that the cryptocurrency project works and works best.

The importance of Mainnet and Testnet to an ICO coin project

Ico (Initial Coin Offering) is home to the most investment opportunities in the cryptocurrency market today. Many investors after buying the token of the project but do not know how to monitor the progress of the project to decide whether to “hold” long-term or not.

When starting an ICO project, the first thing that investors need to consider is the whitepaper of the project. In particular, the development roadmap (RoadMap) will be distributed for testnet testing and mainnet release. If that project successfully runs the test on Testnet and releases Mainnet, its price will naturally grow strongly. Besides, investors must also have confidence in the development team to predict the future potential of the coin and make the best decision.

With ICO projects, often when the project launches only at an infancy level and there is no actual product. Everything seems to be just on the idea, so what is the reason for its price to grow, even sustainable growth? It’s Testnet and Mainnet.

With the projects, in its roadmap there will be time to launch Testnet and Mainnet. The launch of these two networks proves that the developer has done the right thing, i.e. they are actually working. A successful Testnet and the launch of Mainnet means that the idea has been realized. And it is inevitable that the token price will increase because many investors trust and buy.

In fact, there are a lot of coins that have skyrocketed after Testnet’s success. But the opposite is not that it is not impossible, many coins are unable to complete the Testnet and and its value is drastically reduced.

The basic steps when doing testnet

There is no denying that the Testnet serves as an arrow that hits two targets. It can both help users find errors, while contributing to increasing the value of the project and attracting long-term companion investors. Here are the steps investors should take to Testnet.

First, investors need to prepare a variety of wallets (such as Coinbase, Ledger Nano X, Mycelium, Exodus…) to connect to Testnet and receive test coins/tokens. The investor must find out which wallet the Testnet requires to prepare the wallet accordingly.

At this stage, users can experience all the features of that project without paying. The main features are depositing money into a trial loan, trading, becoming a borrower, liquidity … In some cases, the developer will ask the user to experience certain features.

Therefore, regardless of any testnet participation, participants must clearly check the official sources about the developer’s requirements, the form of receiving faucet Testnet, rewards …

Steps to prepare to switch to Mainnet

After successfully conducting testnet and fixing errors if any, the developer will take his project after the next stage, which is Mainnet. The steps to do so are as follows:

Download the Pi Browser App from the iOS App Store / Google Play Store. There, the developer can create Wallet Pi without monitoring, KYC verification, and accessing other Pi applications. The Pi browser is needed to complete multiple transitions to mainnet. 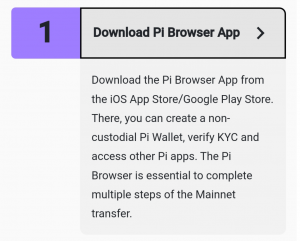 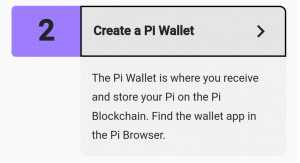 Wallet pi wallet that is the place to receive and store pi number on Pi Blockchain. The wallet app can be found on The Pi Browser.

Before transferring the Mobile Balance to Mainnet, the developer can voluntarily lock part of his transferable balance for mining at a higher rate later. Mainnet transfers will not occur until the account key configuration is confirmed. 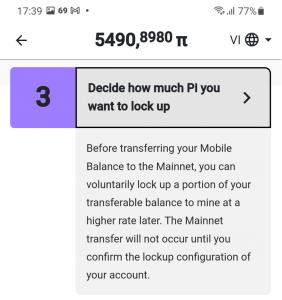 KYC (Identity Verification) is a prerequisite for transferring Mobile Balance to the Mainnet block chain. Visit the KYC app in Browser Pi to verify your identity and submit a KYC application. 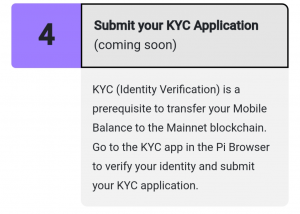 KYC results will depend on identity verification, matching names to Pi accounts, government AML screening and anti-terrorism sanctions lists, and if the account has a history of violating policies or scripts. 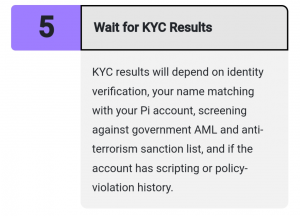 Earn more Mobile Balance to be able to switch to Mainnet, when Ref and Security Circle will pass KYC. 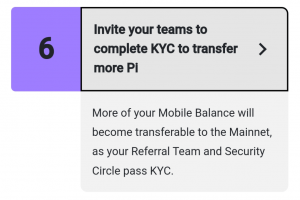 Any investor who learns about ico projects should pay attention to whether there is a time to launch Testnet and Mainnet in their roadmap, if not, it is advisable to reconsider whether to invest in this project, and if so, keep an eye on the launch time to have a strategy to sell or not to sell tokens. Holding. Testnet and Mainnet are both important stages of the project. And Testnet is even an opportunity to make money for investors who like to learn the technology, features and want to accompany the project for a long time.