What is fantom? Highlights of Fantom 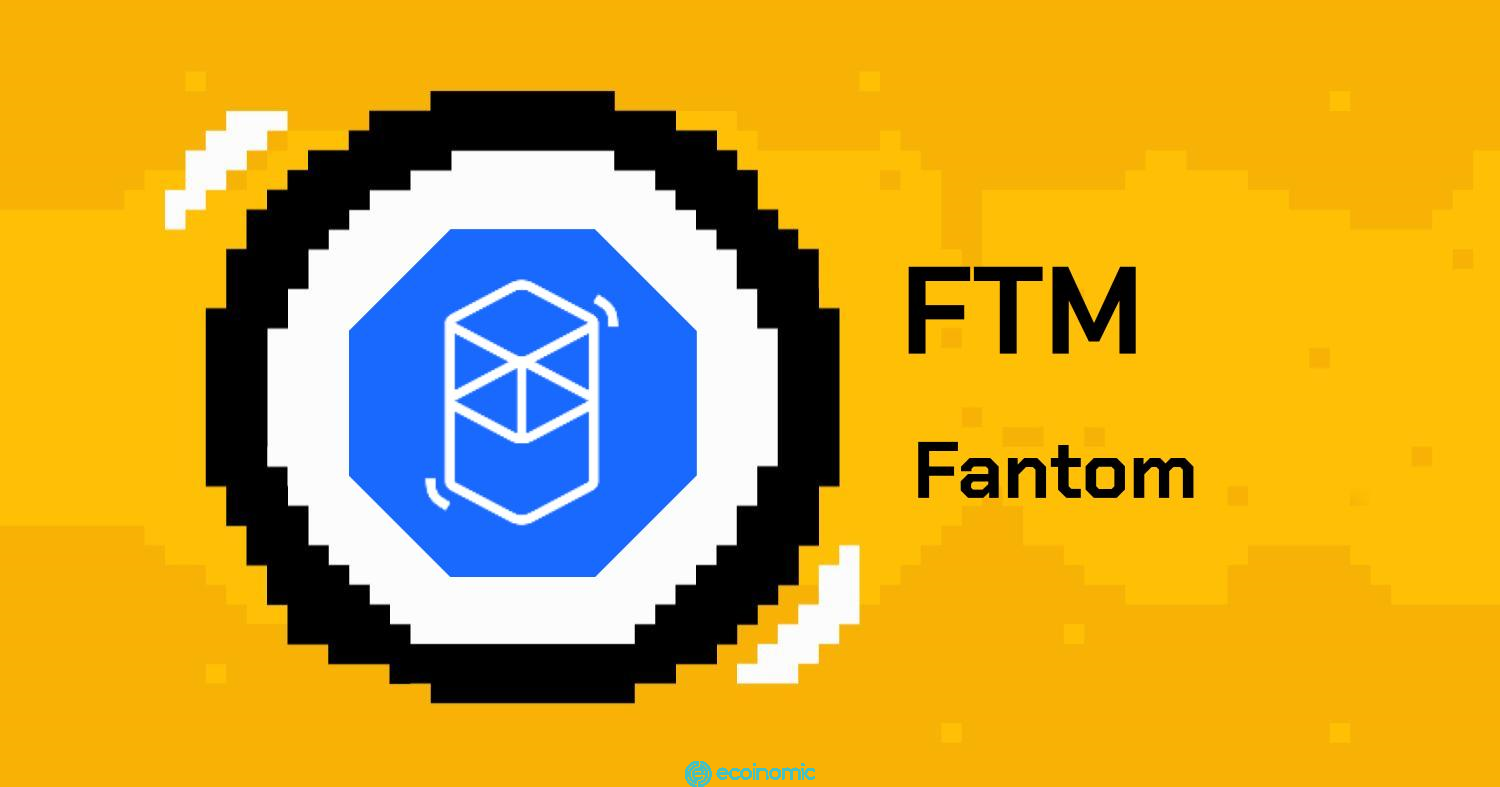 Fantom is a platform that uses distributed ledger technology, operating since December 2019, allowing the construction of DApps that improve the network expansion issues that blockchain platforms are currently experiencing. In essence, Fantom uses the DAG (Directed Acylic Graph) structure to improve the slow transaction errors and high transaction fees of traditional PoW blockchains such as Ethereum, which are not blockchains but the same distributed ledger.

How does Fantom work?

Fantom uses the aBFT consensus mechanism, which allows it to achieve high throughput and low cost while maintaining scalability and security.

In Fantom’s aBFT consensus mechanism, nodes can process asynchronous transactions without a leader’s designation. The Lachesis protocol is capable of one-third of the errors, meaning that 67% of nodes must authenticate the transaction to resolve it. Its final time in a second (almost instantaneously) contrasts with the block validation time of poW blockchains that allow Fantom to operate in a faster and more scalable way.

Lachesis plays an important role. First, Opera – is a PoS Blockchain that is compatible with EVM and uses a Lachesis emulator to approve transactions. Opera is also home to fantom-based DeFi applications, as well as those that have expanded from Ethereum to Fantom such as SushiSwap, Curve, and Yearn Finance.

FTM tokens are used for betting, administration, payments and fees, with a Total Supply of FTM 3.175 billion. Users can bet ON FTM with 4% APY or choose Fantom’s liquid reward and their FTM lock at up to 12% APY. Vesting also plays an important role for some DeFi Fantom protocols.

Each network built on Fantom is independent of each other. Their performance and stability are not affected by traffic or congestion.

The first Blockchain platform (Ethereum and other platforms) opened the door to Smart Contracts, conditional logical guidelines that enable the execution of applications on the Blockchain.

However, with more complex DApps, with the increase of users, the entire network will slow down. This happens because all DApps use the same infrastructure. It is similar to the execution of multiple applications on a computer: at some point, the computer will choke and begin to respond very slowly or even hang completely.

Fantom solved the scalability problem by offering each of its own Blockchain applications, similar to running each application on different computers belonging to the same network.

Each blockchain is independent of each other and may have custom tokens, tokens, and governance rules. However, it’s all tied to Lachesis, Fantom’s ultra-fast aBFT consensus, all blockchains can interact with each other and benefit from the speed and security of the underlying technology.

Each network is completely customizable according to the specific usage.

In other words, Fantom is a network of networks.

Fantom is secured by Proof-of-Stake. Unlike Proof-of-Work, used by Bitcoin and Ethereum, Proof-Of-Stake prevents concentration and saves electricity.

Lachesis can provide organization-level security for distributed networks. Fantom offers absolute endage, which means that transactions can never be refunded as in networks that are end-of-fact by probability.

The consensus mechanism can also scale up to hundreds of nodes, increasing decentralization and thus maintaining security.

Fantom is an open source network with a nature that does not need to be licensed. Anyone can become a validator node.

On Fantom’s Opera Series, the virtually unlimited number of authentication nodes can participate in network security provided that a minimum stake of 3,175,000 FTM is required into the network.

If you own a lower number of FTM tokens or are not experts in running distributed systems, users can still participate in network security.

Users can authorize a minimum of 1 FTM for an authentication node and receive a reward.

Despite the strong competition in the Grade 1 Blockchain network, Fantom has established itself as a legitimate competitor thanks to its strong focus on DeFi use cases. This is led by Yearn Finance founder Andre Cronje, who is also a technical advisor to the Fantom Foundation. Cronje has played a key role in consulting and expanding Fantom’s multi-chain development and has helped launch its bridge to Ethereum.

On January 1, 2022, Cronje announced that he and Daniele Sestagalli were working on a new product on Fantom.

Although details were not disclosed in February, the project is rumored to be a collaboration between two DeFi developers. It may involve one or several protocols led by Sestagalli, such as Abracadabra Money and Popsicle. Sestagalli is the self-proclaimed leader of the “Frog Nation,”a cryptocurrency movement focused on maintaining decentralization in DeFi. He announced the collaboration on Twitter: 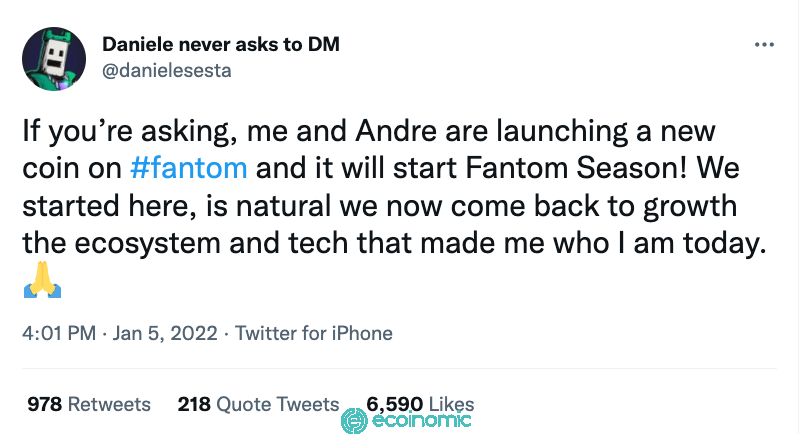 “However, the project is underway after one of Sestagalli’s biggest projects, TIME, was exposed as having a credit card fraudster. Although 0xsifu, aka Michael Patryn, has been voted chief financial officer of the protocol, Andre Cronje has publicly continued to grow with Sestagalli. 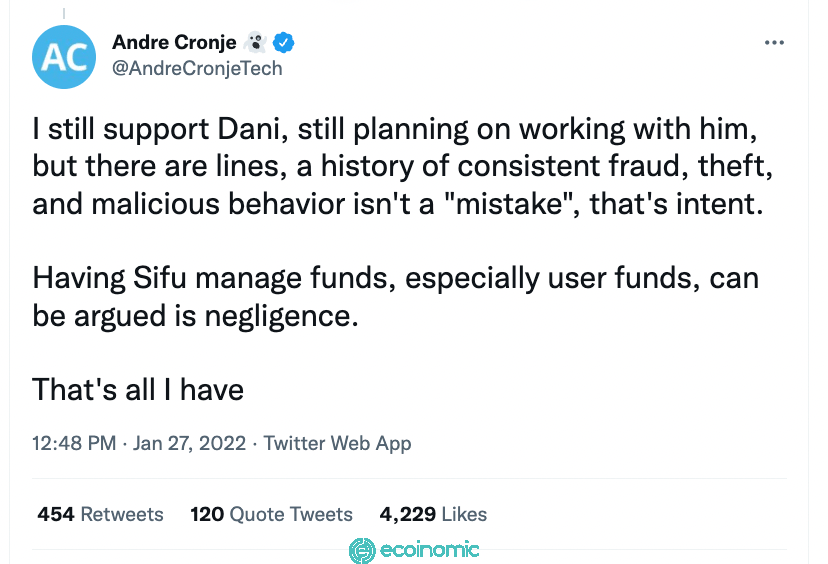 Ecosystem Fantom has a well-developed ecosystem with DApps mostly focused on DeFi applications. According to Defilama, TVL (which is the total amount of assets locked in DeFi’s smart contract) was already $9 billion, putting it ahead of higher-cap blockchains, such as Solana and Polygon. Much of the recent growth in Total Value Locked in was due to speculation surrounding the aforementioned joint venture of Andre Cronje and Daniele Sestagalli. In a post on Medium, Cronje announced the Ve project (3.3) would be an AMM that supports swapping correlated and non-correlated assets equally.

However, Fantom already has some very popular protocols.

Spookyswap is an automated market creation DEX based on BOO tokens. It is a partner of Popsicle Finance, the currency market built by Daniele Sestagalli. Spookyswap offers the functions of a Decentralized exchange such as token swaps, profit farming, single deposit groups, but also NFT and bridges.

Token swaps are charged 0.2% per swap. 0.17% for liquidity providers and 0.03% for BOO service providers. Users can bet their BOO in single betting groups to earn more BOO and get xBOO, from which it is possible to bet to earn other tokens such as wFTM. Spookyswap also provides a bridge to and from a number of other blockchains such as Ethereum, BSC, Polygon, Avalanche, Arbitrum, Harmony, Cronos and UEC. Finally, the exchange released two sets of NFT – Magicats and the official Spookyswap NFT – contributing to the Spooky economy by earning royalties to acquire BOO.

Scream is a decentralized lending protocol that provides transparent and unattended lending solutions for the “high-speed market”, but to improve capital utilization efficiency across the Fantom ecosystem.

Similar to currency market protocols such as Compound, Cream, and Aave, users can Borrow and lend capital using crypto assets as collateral. Scream supports a number of different assets such as WBTC, WETH, WFTM, DAI, USDC, etc. It aims to become one of the most liquid platforms on Fantom to provide users with the best offers.

A unique feature of Scream is ScLoans, the developer tool for non-decentralized loans that must be returned in a trading block. They apply to a number of use cases such as price differences and the opportunity to swap collateral and interest rate swaps. Instead of going through the lending team, developers can interact directly with scToken – tokens used for fast loans. The fee for fast loans is 0.02%.

Geist is a non-custodial decentralized liquidity market protocol where depositors can provide liquidity to earn passive income and borrowers can receive loans quickly. It is based on the Aave money market and competes with other AMM liquidity protocols on Fantom.

Geist operates without administrative rights or ownership, meaning it has no protocol coffers. 50% of revenue from the protocol is redisted back to GEIST manufacturers. Liquidity miners on Geist receive rewards with a three-month inspection period and pay 50% of the penalty for the required rewards. The fine fee is then redistributed to joint stock companies. Users assigned to their GEIST also receive protocol fees from token swaps.

A unique feature of Geist is its generous Airdrop allocation (20%).

Airdropped GEIST is offered linearly for more than a year and may not be invested in the same way as the deposit token (penalty applies). Airdrops have so far been made available to the communities of Aave, Ellipsis and Lobser DAO.

Beethoven aims to become a “one-destination decentralized investment platform” on Fantom. It is built on the Balancer V2 and calls itself “the first next-generation AMM protocol on Fantom”. Beethoven offers various currency market products such as weighted investment groups, stable groups and token swaps.

With weighted investment groups, users can collect fees from traders who rebalance their portfolios by tracking Arbitrage trading opportunities. A group can consist of up to eight different tokens, with each token assigned a different weight based on its weight in the group. Assets such as stablecoins or synthetic currencies with relatively little volatility are traded in Curve-like StableSwap AMM.

In addition, Beethoven allowed token launches through LBP (Liquidity Bootstrapping Pool). An LBP Launch is similar to a crowdfunding mechanism. It allows for transparent pricing checks, the rational distribution of new tokens to the community, and the ability to launch liquidity for new projects. Since Beethoven was not allowed, anyone could make an auction and make an LBP.

Tarot is another decentralized lending protocol where lenders and borrowers interact in separate lending groups. Basically, it is a copy of some of the protocols mentioned earlier, since the Tarot offers the same unsupervised loan and loan, without permission. In addition, Tarot users can also engage in leverage-based productivity cultivation.

Tarot rewards liquidity providers through Tarot Vaults. Users can automatically earn rewards by offering their LP tokens in tarot vault-enabled loan groups. The liquidity provided will automatically be placed in the vault and create additional rewards. When withdrawing LP tokens, liquidity is also withdrawn from the vaults. A bonus system is not allowed to be reinvested and can be made by anyone to receive a group’s pending rewards. In return, they keep a small percentage of rewards as reinvestment bonuses (1%).

What is the future of the Fantom project?

In the future if Fantom attracts more DApp developers to form a vast ecosystem like the blockchains of ETH and Polkadot in the present, the project will have huge potential.